Showing that classic anime can never be truly overlooked Detective Conan’s 25th Film Detective Conan: The Bride of Halloween has earned a grand total of 1.9 Billion yen (15 Million USD )in it’s opening weekend. The action packed film sold a grand total of 1,321,944 over the course of it’s opening weekend.not to mention it was even ranked the #1 film in the Japanese Box office from April 16th to 17th 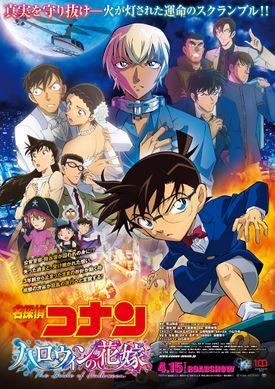 The movie takes places in Shibuya on Halloween. At the Shibuya Hikarie building, a certain wedding ceremony is taking place. There, Miwako Sato is in a wedding dress. Suddenly, an intruder bursts in, and Wataru Takagi is injured protecting Miwako. At the same time, the serial bombing criminal from the incident three years ago that killed Jinpei Matsuda (whom Miwako was in love with) escapes. Rei Furuya, who used to be a classmate of Jinpei's at the police academy, tracks the culprit down, but a mysterious costumed person appears and attaches a collar bomb to his neck. Conan hears about the incident that happened three years ago from Rei, and tries to disarm the collar bomb.